Addendum: Please note that this car does not come with an owner’s manual.

Released in 1971, the code R107 chassis Mercedes-Benz has endured as a status symbol for over 40 years. Richly featured, impeccably well built, and powerful, this third generation of the Sportlich-Leicht class further developed the luxury tourer concept atop the foundations laid by the previous code W113 chassis. Produced for just shy of 20 model years, the R107 stared in films—and competed overland endurance rallies in some of the harshest environments the planet has to offer. This duality further cemented Mercedes-Benz’s status as one of the foremost manufacturers of wonderfully engineered automobiles. Beloved by millions, the third-generation of the SL roadster stands as one of the true greats.

As indicated by its accompanying CARFAX, this wonderful example of the Mercedes-Benz 560 SL was delivered to the Chicagoland area and would remain in the region for the subsequent 30 years. Finished from the factory in Anthracite Gray Metallic paint over a gray leather interior with a black fabric soft top, this combination is still sported by the vehicle to this day. Further options from the factory include: a Becker Mexico Grand Prix radio, automatic climate control, a folding armrest, an outside temperature indicator, and a deletion of the rear end spoiler.

This Mercedes-Benz presents in very fine condition today, no doubt a reflection of its limited use; at the time of cataloguing, its odometer indicates under 10,000 miles driven. Under the hood shows in equally tidy condition, with the washer fluid reservoir appearing to have been replaced sometime in the not-too-distant past. In addition, the center section of the hardtop has been resprayed. This 560 SL is accompanied by its spare tire and tool roll.

A wonderful final-year example of the timeless chassis code R107 Mercedes-Benz, this 560 SL is an appealing display of the Stuttgart firm’s finest virtues: exceptional build quality, a robust powerplant, and effortless style. 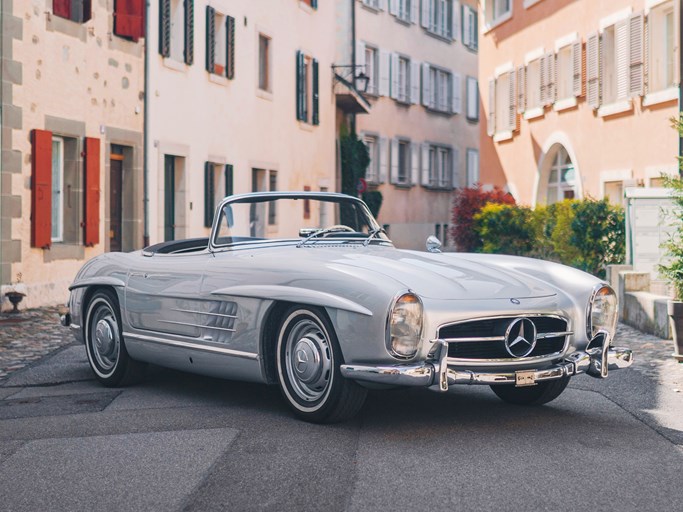