Addendum: Please note that further inspection has revealed that this lot is not equipped with an air conditioning system.

Jaguar introduced the Mark 2 saloon in 1959 as the successor to the model retroactively known as the Mark 1. The new car was very well-received, featuring added visibility, strong performance, and a luxurious interior. These cars were purchased by executives, celebrities, and even featured in film and television. The Mark 2s were offered with three different engines displacing 2.4, 3.4, or 3.8 liters. Cars equipped with the 3.8-liter engine were capable of a 125-mph top speed, making it the fastest production saloon in the world at the time. Equally impressive was the car’s 8.5-second 0–60-mph sprint. Jaguar produced the Mark 2 through 1967, at which point the naming designation changed to 240 and 340. Over the Mark 2 production run, Jaguar built 27,848 with the 3.8-liter engine.

This 3.8-liter Mark 2 saloon was completed on 15 March 1961 and delivered new to the Duchess Auto Company of Millerton, New York via distributor Jaguar Cars of New York. An accompanying JDHT Trace Certificate shows that it was originally clad in the color combination of Opalescent Dark Green over Biscuit leather. The car’s original bill of sale shows that it was purchased one month later by George Brothers of Great Barrington, Massachusetts. After passing through two additional owners during the 1980s, it was acquired on Halloween 1987 by Robert Ducibella of Bethany, Connecticut.

Concours registrations and awards on file show that Ducibella—a very active Jaguar Club member—wasted no time in exhibiting this new prize. Over the next several years this attractive Mark 2 saloon claimed first prize at several Jaguar Club events. It is believed that Ducibella had this award-winning chassis refinished in its factory-correct Opalescent Dark Green sometime after 1997.

As presented today, this Mark 2 is a striking example of the model’s elegant styling and enduring appeal to marque enthusiasts. The car’s Biscuit interior is generously appointed with handsome burl trim throughout, as well as a Radiomobile push-button radio, correct Smiths instrumentation, and four-speed manual transmission with overdrive. It presently rides on a stunning set of center-mount chrome wire wheels wrapped in Vredestein Sprint ST tires befitting a period-correct appearance.

These cars are highly sought after by British car collectors, with many claiming the Mark 2 is the best-looking Jaguar saloon. With this award-winning example retaining its factory-correct color combination and numbers-matching 3.8-liter six-cylinder engine, it presents a fantastic opportunity to experience this lauded model for one’s self. 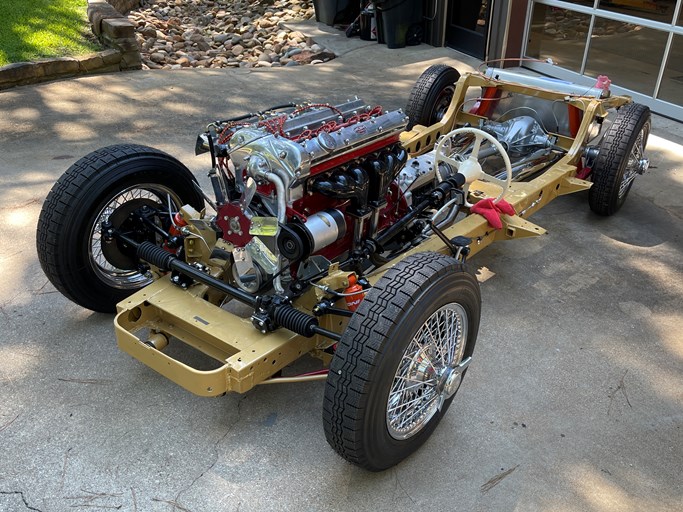