Throughout the mid-1950s, Zagato cultivated a reputation of modifying sports and grand touring cars for racing. Notable among these were the Fiat-Abarth 750 GT and Alfa Romeo Giulietta SVZ, which demonstrated Zagato’s ability to improve aerodynamics and reduce weight compared to factory-built bodywork—yielding cars that were both visually striking and highly effective in competition.

When approached in 1957 by Porsche racing driver, Claude Storez, Italian carrozzeria Zagato agreed to build a special aerodynamic body for his 1957 Porsche 356 Carrera Speedster. Leaving Zagato’s Milan workshops in the latter half of 1958, the body was finished in white, featuring a single-piece curved windshield with red longitudinal fins on the rear wings. Once the body was complete, Zagato shipped this car back to Stuttgart, where Porsche fine-tuned the mechanics and then delivered the car to Storez.

The driver entered his Porsche-Zagato into a stage race of the Tour De France Automobile in September 1958. It is believed that Storez finished in 2nd place in the GT race at Reims, behind Olivier Gendebien in his Ferrari 250 GT TdF; a side-shot photograph of Storez in his “139”-numbered Porsche-Zagato from this outing remains one of the select few of this car in circulation. Storez subsequently entered his highly competitive Zagato-bodied Porsche 356 in a French rally in February 1959. Tragically, however, he was killed in an accident on the last stage of the rally, and his Porsche-Zagato disappeared after the wreck was cleared from the track.

Decades later, a prominent American collector, Herb Wetanson, approached Zagato and commissioned a Porsche-Zagato 356 Speedster identical to the car driven by Storez car. Zagato termed this recreation as ‘Sanction Lost’, and the Speedster was dedicated to marking the 60th anniversary of Porsche’s founding. The term ‘Sanction Lost’ is used by Zagato in this instance—rather than the "Sanction II" descriptor often applied to carefully researched continuation cars created by their original builder—as the original Porsche-Zagato has never been found

Using the latest photometric technology, Zagato was able to scan original photographs of Storez’s car to render an accurate digital design of the body. While Zagato searched their archives, however, they discovered a concept drawing for a Zagato-bodied Porsche Carrera Coupé dated 11 September 1959. It was decided that alongside the nine units built to commemorate Storez’s Speedster, that nine examples of the Coupé would be manufactured.

All 18 of these cars were built using genuine Porsche 356s as donor cars, though only one Speedster and two Coupés were fitted with Carrera engines. Just like Storez’s car, the Speedster and one of the Coupés were finished in Bianco Gardenia with Red highlights on the iconic Zagato tailfins, matching the original colour scheme of the Storez’s Speedster. This Coupé, with its wonderful livery and Carrera engine, is offered today alongside its matching Speedster sister.

As indicated by a copy of its factory Kardex, this Porsche 356 Carrera Zagato ‘Sanction Lost’ was built from a 1961 Porsche 356 B Coupe which left the Stuttgart factory on 2 August 1961. Following the start of the Porsche-Zagato Sanction Lost programme, this car was sent to Zagato in 2015, where they removed the original Porsche shell and replaced it with their coach-built Coupé body. Following the Coupé’s completion, the vehicle was delivered to its new owner in 2017. Inside, the interior features red leather front seats, black leather “kinder” small rear seats, a black carpet, and a Bianco Gardenia dash panel.

Presented alongside the vehicle is a Porsche Certificate of Authenticity, a copy of the build sheet, and a digital file containing magazine articles, photographs, and Zagato brochures. 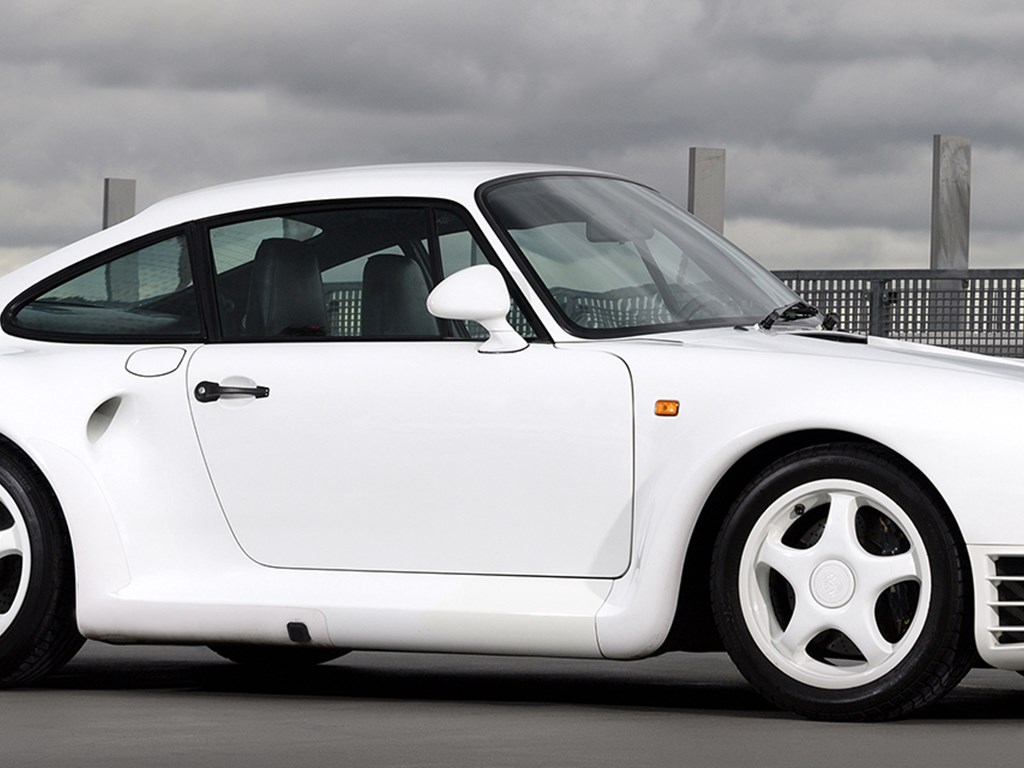 Maneuverable, fast, and weather-resistant —the best car for autumn in Britain is an air-cooled Porsche.