Perhaps more than any other automaker, Ferrari has a tradition of building limited-production supercars that push the envelope of performance and design, while enriching the manufacturer’s cachet. From the competition-intended 288 GTO of the mid-1980s, through the 40th anniversary F40 model, the F50, and the Enzo, these cars have served heritage commemorative purposes while reinforcing Maranello’s identity as a boutique company that builds nothing less than the finest money can buy.

By the early 2010s this notion was challenged by a new breed of hybrid-electric hypercars being produced by other manufacturers, most notably the Porsche 918 Spyder and the McLaren P1. Relying on the spirit of competition that had served it so well on the track for 65 years, Ferrari duly met this challenge with yet another limited-production supercar, one that would dwarf its predecessors in power, technology, and scope. Unveiled at the 2013 Geneva Salon, the new model was simply called LaFerrari—literally “The Ferrari.” When the performance numbers and build approach were eventually dissected by the media and enthusiasts, it was difficult to argue with the model’s boastful name.

The heart of LaFerrari is a rear-placed, 6.3-litre V-12 that was directly lifted from the developmental FXX model. With an absurd compression ratio of 13.5:1 the V-12 develops 789 horsepower, redlining at a whopping 9,250 rpm. The 516 ft lb of torque arrive relatively high, just shy of 7,000 rpm. So an electric motor derived from the company’s F1 car KERS technology was installed in the rear, adding 161 horsepower, most of which is tapped for use at lower rpms. Power is routed directly to the rear axle alone, and shifting is accommodated by a seven-speed dual clutch transaxle.

In total, the two engines combine for a head-spinning 949 hp and 663 ft lb of torque, propelling the slippery LaFerrari to 60 mph from standstill in as little as 2.4 seconds. The quarter-mile arrives in 9.7 seconds at 149.2 mph, besting both the Porsche 918 and the Bugatti Veyron. As Road & Track writer Larry Webster noted after his test, “It’s closer to driving an LMP car than, say, a 458 Speciale.”

The LaFerrari’s carbon fiber tub is baked alongside those of the Scuderia Ferrari’s Formula 1 cars, and the hypercar’s entire architecture is based around the driver’s seating position, which is 2.4 inches lower than that of the Enzo. This was achieved, ironically, by removing the seat. That is to say the LaFerrari’s seats are little more than Alcantara-swathed pads that are directly attached to the floor and rear firewall. Accordingly, the pedals are adjustable and the “seat” is custom-padded for each individual buyer.

Ferrari’s in-house designer Flavio Manzoni penned the coachwork, which is beautifully low-slung and sleek while eschewing the brutal and somewhat controversial styling of the Enzo. In order to control all the power on tap, the body was adorned with a host of electronically deployed active aerodynamic elements, including smart front and rear undercarriage panels, and a rear spoiler, which manage to continuously attenuate downforce from between 200 and 800 pds. Mammoth cross-drilled and vented Brembo carbon ceramic disc brakes and proprietary Pirelli P-Zero Corsa tires complete the technical profile, keeping the LaFerrari grounded as possible through screaming switchbacks.

Concluding production in January 2016, manufacture of the closed variant of the LaFerrari was capped at 499 examples, lending the model the degree of exclusivity expected of a top-shelf Maranello hypercar. Officially retailing for over $1.3 million, all 499 cars were purchased by preferred clients before the first LaFerrari was even complete.

Road & Track's Webster was amazed at the hypercar’s versatility, and its grit at the limit. “The LaFerrari…was surprisingly docile at low speeds…There’s a lot of talk nowadays about how civilized sports car have become [and] how modern tire and electronic systems have insulated drivers…The LaFerrari stands that notion on end…It demands a style that’s both aggressive and delicate. An amazing amount of speed is available to even modestly skilled drivers…but only the truly skilled can deploy all it offers…Take the LaFerrari where it wants to go…and the fangs come out. And that’s exactly how it should be.”

This incredibly well presented LaFerrari benefits from a life of doting care under just two ownerships while experiencing very minimal driving use. Distributed in 2016 to the authorized Ferrari dealer Niki Hasler for customer delivery, the LaFerrari was purchased new by a respected marque collector based in Switzerland, and it was specified with a bespoke paint and interior combination that was used on this example alone. The exterior was finished in Vinaccia while the interior was upholstered in specially ordered Pelle Chiodi Di Garofano, replicating colors used on two of the owner’s significant historic Ferraris.

Retained by the original owner for a year or two, the LaFerrari was later acquired by the consignor, who imported the car to the United Kingdom with VAT and duties paid, and first registered it in May 2018. Since then the Ferrari has lived a quiet life of controlled storage, and the odometer currently displays just 918 miles at the time of cataloguing. Among its rare public appearances, the LaFerrari was presented once at a supercar day at Stoner Park.

Accompanied by a full set of color-matched luggage, a toolkit, and owner’s manuals, the LaFerrari is documented with a full service history conducted by the authorized dealers Niki Hasler in Switzerland, and Maranello Concessionaires in the UK. The uniquely finished and rarely driven berlinetta awaits its next caretaker, offering prodigious power and advanced technological function. It should find a warm welcome at marque events and major concours d’elegance worldwide, or it may be quietly admired for its brilliance as Maranello’s most highly developed hypercar, an eminent example of the Ferrari. 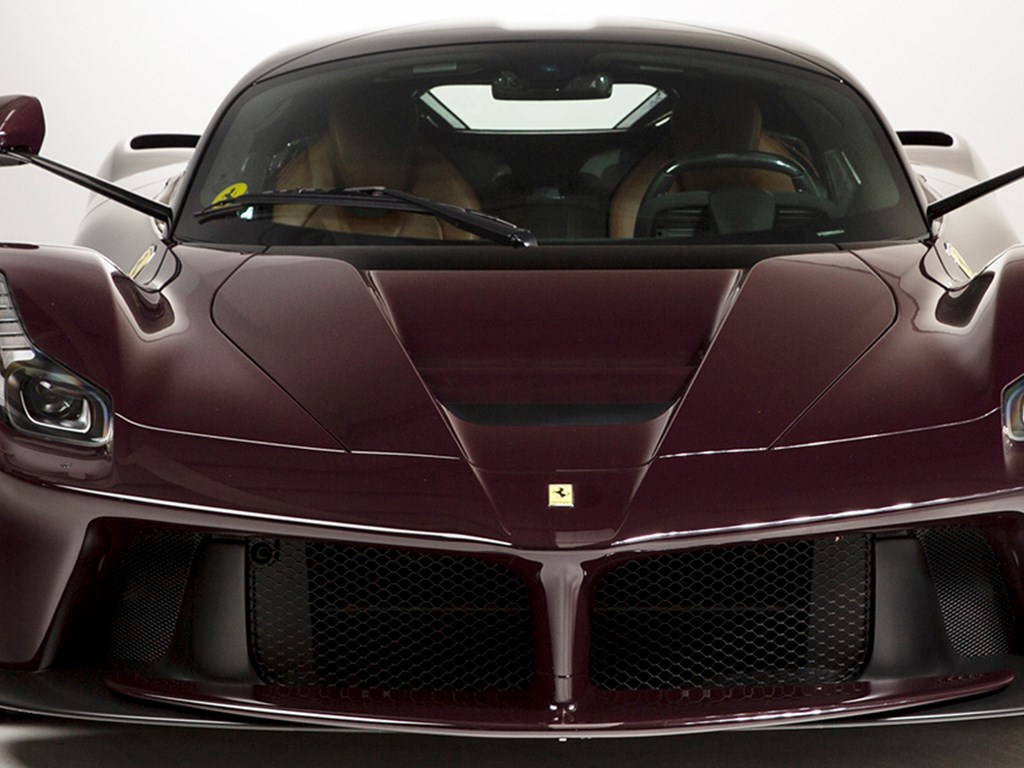