Although the Mercedes-Benz 300 SL Coupe did not enter production until 1954, and the Roadster until 1957, the lineage of both models goes back as far as 1952, when the company announced its return to motor racing with the two-seat coupe W194. Designed by legendary Mercedes engineer Rudolf Uhlenhaut, the W194 featured a stiff multi-tubular spaceframe chassis powered by the tried-and-tested 3.0-litre, six-cylinder M194 engine. Power was initially a somewhat conservative 175 brake horsepower, with Mercedes opting to focus their attention on the car’s aerodynamics instead—this being of primary concern, given their intention to enter the Le Mans 24 Hours in June of that year. With the engine canted over at 50 degrees, a much lower frontal area than normal was achieved, and the car was clothed in svelte aluminium bodywork with distinctive upward-hinging “gullwing” doors.

On track, the car—by now known publicly by the 300 SL moniker—was an immediate success. In its first competitive outing—the Mille Miglia, no less—300 SLs finished 2nd and 4th, courtesy of Karl Kling and prewar ace Rudolf Caracciola, respectively. Just six weeks later, Lang and Reiss took an improbable victory at Le Mans, ably backed up by teammates Helfrich and Niedermayr in 2nd place. This was a remarkable result for a car which had barely been on the drawing board just 12 months previously. A further 1-2 in the season-ending Carrera Panamericana capped a momentous season for Mercedes-Benz, so much so that they withdrew from sports car racing the following year to concentrate on their much heralded, and ultimately highly successful, return to Grand Prix racing in 1954.

Ever the opportunist, and conscious that the race-bred 300 SL would make an ideal basis for a superb road car, American Mercedes-Benz importer Max Hoffman approached the Daimler-Benz board with a proposal to put the car into series production. Approval was forthcoming in September 1953 and incredibly, just five months later, a road-legal 300 SL Coupe was unveiled at the 1954 International Motor Sports Show in New York. By now boasting direct fuel injection, and 215 brake horsepower, it was then the fastest car in the world, and proved a huge hit with US and European buyers alike.

However, by the start of 1957, orders for the Coupe version were dwindling, whereas enthusiasm for convertible cars—particularly in the more temperate parts of the US and Europe—was at an all-time high. With this in mind, Mercedes-Benz introduced the Roadster variant of the 300 SL. Although retaining the majority of the running gear of the coupe, it benefitted from a modified chassis (to accept conventional outward-swinging doors and wind-down windows) and a revised independent rear suspension providing more progressive and predictable handling. By the close of 1957, the last of the 1,400 Coupes produced had left the Unterturkheim factory, the year proving something of a “crossover” with some 554 Roadsters having been produced concurrently.

This magnificent example dates from 1961—a highly desirable year for 300 SL production, as it saw the introduction of Dunlop four-wheel disc brakes. One of just 250 Roadsters produced that year, chassis 02899 left the factory with the handsome factory hardtop which it still retains, destined for the all-important U.S. market.

While definitive details of the car’s early life remain somewhat sparse, by 1988 it had ended up in the possession of Mrs. Dorothy S. Peterkin of Lake Geneva, Wisconsin, whose late husband—prominent businessman, investor and aviator Daniel Peterkin Jr. —had been a committed Mercedes-Benz enthusiast for many years.

Following Mr. Peterkin’s death in May 1988, his widow retained the car for less than a year before selling it to sometime-300 SL racer and former Max Hoffman employee, Harry Woodnorth, in April 1989. Woodnorth appears to have owned the car only very briefly and, after passing through the hands of several prominent US car dealers, it was purchased in April 1990 by former Le Mans and IMSA driver, Rene Herzog of Zurich, Switzerland. Once again, Herr Herzog appears to have kept the car only very briefly, selling it to Uwe Holy, one of the founders of German fashion brand Hugo Boss, who subsequently emigrated to Switzerland together with the car in late 1990.

During Herr Holy’s ownership, the car was converted from its original US to European specification by marque experts Kienle Automobiltechnik of Ditzingen, Germany, which included replacing the original US-fitment speedometer—this at the time of export from the US reading 49,145 miles—with a corresponding European-specification, metric-calibrated (and, naturally, zeroed) equivalent. Kienle also carried out a comprehensive service and clutch change in 1999—at a cost of some €3,308—while fellow specialists Fuhrmann & Schulze of Stuttgart effected a complete overhaul of the braking system in January 2003 at a cost of €5,644, and a full rebuild of its engine (the numbers-matching unit per the Mercedes-Benz fahrzeugdaten card copy on file) in October 2004 at a further cost of some €31,265.

After 24 years of ownership, albeit having covered only a modest 8,600 kilometres during this time, Herr Holy disposed of chassis number 02899 to the current Swiss owner in May 2014.

Combining the very best of both worlds—comparable styling and performance to the Gullwing, but with welcome additional practicalities such as easier cabin access, a superior rear suspension arrangement, and greater luggage capacity—the 300 SL Roadster remains perhaps the ultimate grand tourer of the late 1950s and early 1960s. This gloriously presented example is further enhanced by the highly desirable late-model disc brake and factory hardtop options, and truly remains a car for all seasons and situations. Equally at home in the Alps or on the Autobahn, the 300 SL Roadster quite simply never fails to live up to expectations. 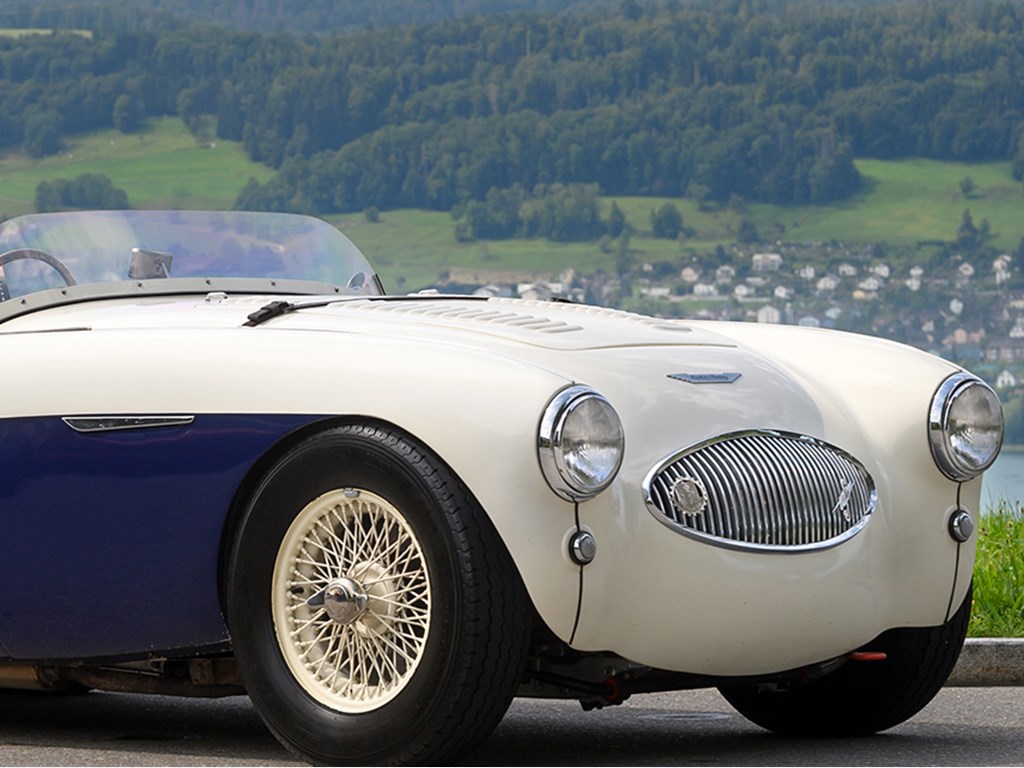