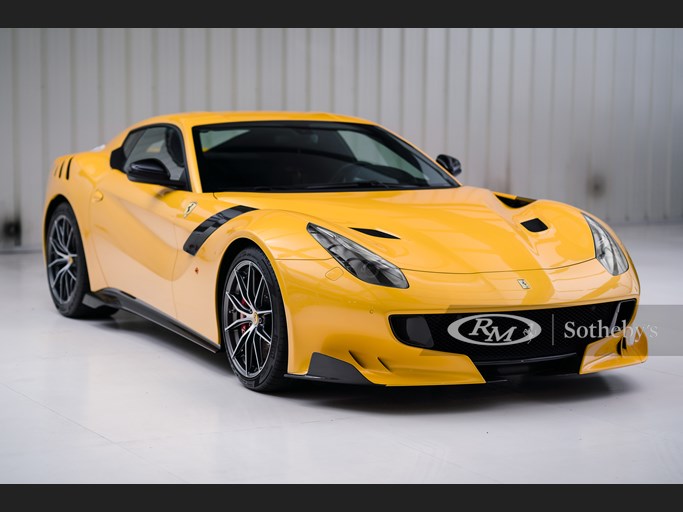 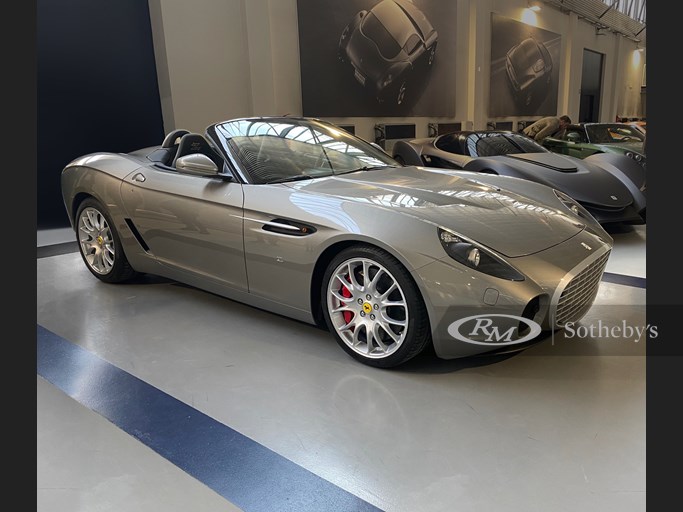 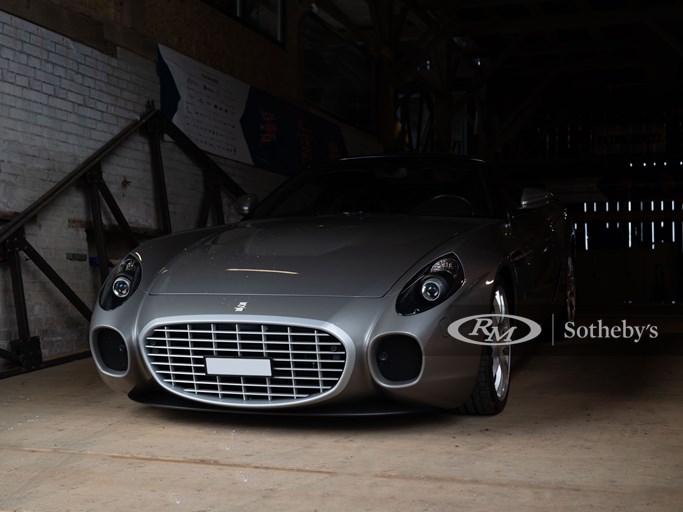 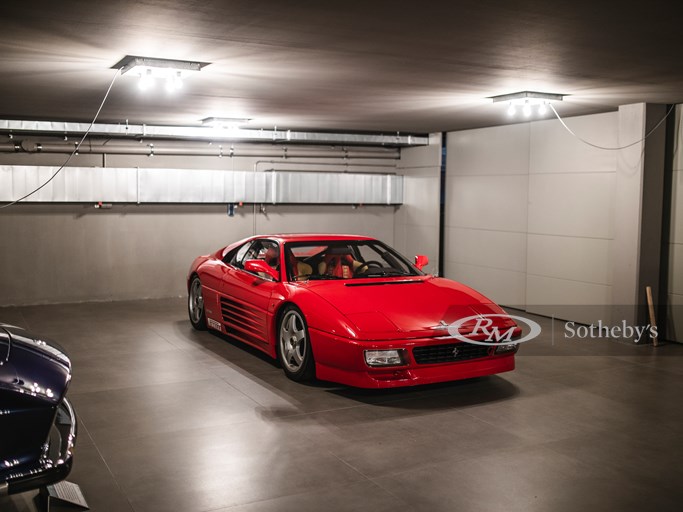 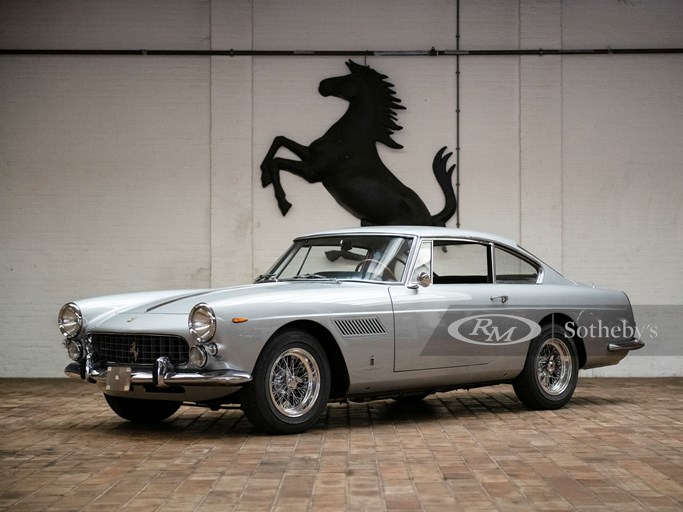 LONDON (27 January 2021) – RM Sotheby’s is delighted to present four outstanding sports cars from Maranello’s illustrious history at its upcoming Paris auction. The consignments join a growing selection of automotive exotica already set to be sold at RM Sotheby’s annual season-opening European auction, which will take the form of a livestreamed sale with no in-person attendance on 13 February. Remote bidding options for the auction include via telephone, internet, or absentee bids.

Roaring its way onto the saleroom floor is a star of many of the world’s leading automotive magazines. The 2016 Ferrari F12tdf ‘120th Anniversary’ started life as the pre-production model used to introduce the F12tdf to Ferrari’s VIP clients at the 2015 Finali Mondiali. Unveiled by the Scuderia’s then-Formula 1 drivers, Sebastian Vettel and Kimi Räikkönen, alongside Chairman, Sergio Marchionne, spectators were invited to watch Vettel and Marchionne take to the Mugello track for several demonstration laps. Following the launch, the car took a starring role as part of Ferrari’s media fleet, seen out on the Fiorano test track during the model’s international test drive event. Later, the car would head to the UK, where renowned journalists, including Chris Harris, Andrew Frankel and Ollie Marriage took the wheel. The car’s striking Giallo Triplo Strato exterior and Nero Alcantara interior was featured in several print and online features before the vehicle returned to Italy.

After a period on display at the Museo Enzo Ferrari in Modena, Marchionne was approached by Piero Ferrari, who was looking to auction an F12tdf on behalf of Associazione Centro Dino Ferrari, a charity founded by Enzo Ferrari himself. The F12tdf was designated for this purpose and fitted with a plaque to mark the 120th anniversary of Enzo Ferrari’s birth. It was also signed by Piero Ferrari. The car was purchased at the charitable auction in October 2018 by the current consignor and is unquestionably the most significant Ferrari F12tdf in existence. The car has covered just 6,800 km from new and comes with its Classiche-issued ‘Attestato per Vetture Serie speciali’ yellow binder (Est. €600,000 - €700,000).

Joining the TdF is a rare example of the F12’s forebearer. The 2009 Ferrari 599 GTZ Nibbio Spyder is one of just six GTZ Nibbio Spyder’s built by famed coachbuilder, Zagato. Completed in January 2020, the car represents a long but seldom frequent relationship between Ferrari and Zagato. The design house has transformed only a handful of Ferrari models over the last eight decades, with many commissioned by Ferrari customers. The 599 GTZ Nibbio conversion was offered for public sale by Zagato following a private commission and customers were able to choose from either coupe or spyder coachwork. Each 599 GTZ Nibbio Spyder sports a unique specification, with the consigned car tastefully finished in gunmetal grey with black leather interior.

The car sports a number of optional extras, including a carbon fibre steering wheel, yellow tachometer and Challenge style wheels. Representing the very best in 21st century coachbuilding, this rare and highly glamorous sports car would make a bold addition to any car collection (Est. €1,400,000 - €1,600,000).

If historic racing is more your preference, the 1994 Ferrari 348 GT Michelotto Competizione is the lightweight, track-focused supercar designed to compete at the highest level of motorsport. Hand built by Michelotto to fit the needs of Ferrari’s VIP privateer racers, only 11 examples were produced, each sporting significant upgrades over the standard Ferrari 348. Most notably, the cars received Ferrari F40 half shafts and reconfigured fuel mapping, which boosted the standard engine to 360bhp. Brembo 15-inch cross-drilled brakes, magnesium wheels and purpose-built suspension were added, while a fastidious weight-saving programme complemented improvements to the car’s overall rigidity.

One of the four U.S.-delivered cars, this GT Michelotto Competizione has never raced, participating only in non-competitive track days. To comply with American FIA regulations, the car boasts a fire-extinguisher system and Momo racing seats as special-order features. After passing through three private owners in the U.S., the car was purchased through RM Sotheby’s by the current consignor, who exported the car to Germany. With the odometer reading just 3,503 km and benefiting from a gearbox rebuild and new timing belts in 2019, this seldom-used racer would be perfect for an enthusiast looking to compete in historic motorsport events, including the Le Mans Classic (Est. €250,000 - €290,000).

The Paris sale will also welcome a beautiful 1960s Pininfarina-designed Ferrari. Arguably one of the most famous model designations in motoring, the 1963 Ferrari 250 GTE 2+2 Series III by Pininfarina is the epitome of style, luxury, and speed. The 735th 250 GTE built, this exquisite, matching-numbers engined example is finished in its original combination of Grigio Argento over exceptionally preserved Nero interior and is revered as being a desirable third-series example (Est. €335,000 - €385,000).

Further information on the forthcoming Paris sale can be found at rmsothebys.com.